There are four changes for the Pool A top of the table clash with the tournament hosts. Rob Kearney and Keith Earls, who is Ireland’s record World Cup try scorer with eight tries, both return to the back-three alongside Jacob Stockdale.

Chris Farrell, a first half replacement during the 27-3 bonus point win over Scotland, starts this time around, combining in the centre with Garry Ringrose. Connacht’s Jack Carty joins Conor Murray at half-back for his second start at Test level.

Rory Best captains Ireland for the 36th time, going level with Keith Wood on the all-time list. For his 100th start for his country, Best leads an unchanged pack which includes his Ulster colleague Iain Henderson who wins his 50th cap, almost seven years on from his debut against South Africa.

Peter O’Mahony, who has come through head injury assessments two and three, resumes in the back row alongside Josh van der Flier and CJ Stander, the Mastercard player-of-the-match from the first round clash with Scotland in Yokohama.

Joey Carbery is poised to make his Rugby World Cup debut off the bench, having shaken off an ankle injury. Sean Cronin and Rhys Ruddock are also set for their first appearances of the tournament in Japan, while fellow replacements Dave Kilcoyne, Andrew Porter, Tadhg Beirne, Luke McGrath and Jordan Larmour all saw action against the Scots. 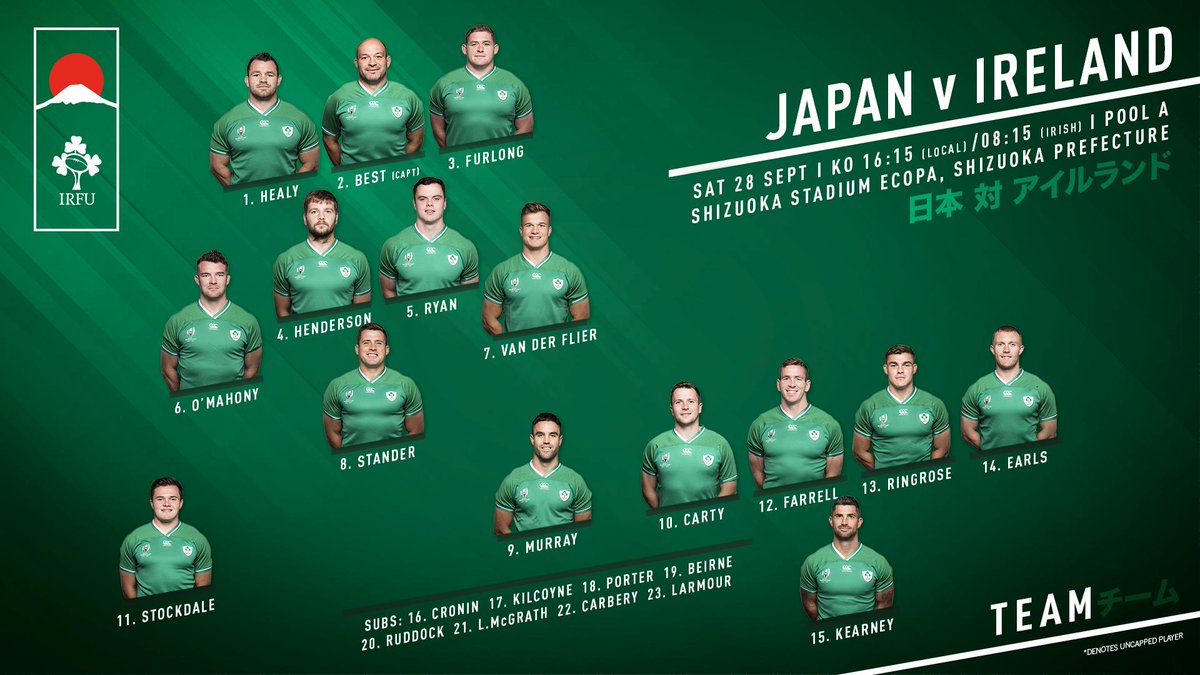 Speaking at the team announcement press conference, Schmidt said: “We wanted to give Jack Carty as much certainty as possible so we told him on Tuesday he would be starting (against Japan) so he could get his head around it.

“He came on and played really well against Scotland. He cleared our lines really well a couple of times when we had to come out of our 22. The distance of his angled kicks was spot on.

“Johnny (Sexton) is never happy about being left out. He is always looking to play but he had a good hit-out against Scotland. He got a little bit of mileage under his belt there. We thought about putting him on the bench, but we’ve got a lot of time for Joey Carbery. He was fit and ready for Scotland so we want to get him involved.”

He added: “At the last World Cup there were some players who didn’t play a lot and then suddenly they were required for the quarter-final – and maybe they didn’t have the confidence we would have liked them to have.

“We have committed in the last few years to making a decision earlier in the week in some positions and saying, ‘look, this is going to be your game. Step up and take ownership’.

Hopefully it will be a cohesive performance because it will have to be. Japan are really well prepared. They’ve had something like 180 to 200 days in camp this year. A number of them played for the Sunwolves together and then on top of that, they’ve got a couple of real quality operators to come in with the likes of Amanaki Mafi.

“They’re going to have a very vocal hometown crowd. It was great for us to play a ‘home match’ in Yokohama Stadium with ‘The Fields of Athenry’ belting out and the amount of green jerseys and support we had. I think we might be in the minority this week and they’re going to have to give us as much volume as they can.”