Jonathan Sexton will become the 106th player to captain Ireland when he leads the team out at Kobe Misaki Stadium on Thursday to play Russia (kick-off 7.15pm local time/11.15am Irish time).

There are 11 personnel changes for Ireland’s third Pool A match, with only Rob Kearney, who passed his HIA protocols, Garry Ringrose, Keith Earls and Peter O’Mahony retained from last Saturday’s 19-12 defeat to tournament hosts Japan.

Provincial colleagues John Ryan and Jean Kleyn will make their Rugby World Cup debuts in Kobe, and it is an all-Munster tight five as Dave Kilcoyne, Niall Scannell and Tadhg Beirne are also selected to start. Both Kilcoyne and Beirne came on as replacements in the first two pool games.

Vice-captain O’Mahony is joined in the back row by Rhys Ruddock and Ulster’s Jordi Murphy, the injury replacement for fractured foot victim Jack Conan. Murphy features at the base of the scrum, with two of his previous five Test starts at number 8 coming against Italy this year.

Sexton, who picked up a quad injury against Scotland, returns in an all-Leinster half-back pairing with Luke McGrath, while Ringrose is set for his third World Cup start on the trot. He teams up with Bundee Aki who was his centre partner for the opening 27-3 bonus point victory over Scotland in Yokohama.

Andrew Conway slots back in on the right wing and will be looking to add to his try from the Scotland match. His Munster team-mate Joey Carbery will provide scrum half cover for the first time, with fellow replacements Andrew Porter, Tadhg Furlong, Iain Henderson, CJ Stander, Jack Carty and Jordan Larmour all poised to make their third appearances of the pool stages. 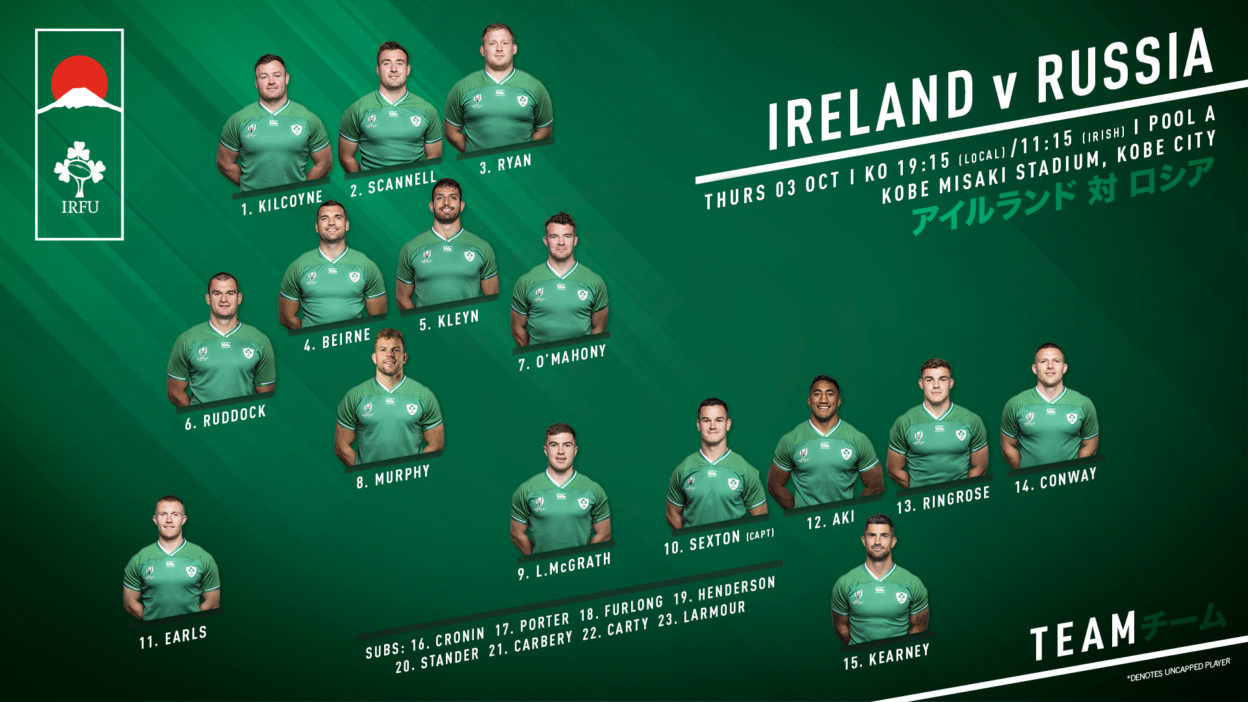 Speaking about the personnel changes to the team, head coach Joe Schmidt said: “We do need to make sure everyone is ready and involved as much as possible, to get everyone up to speed. It’s pretty tough with a six-day and then a five-day turnaround – there’s always going to be a bit of attrition.

We’re looking to freshen it up and give guys an opportunity. It’s great because we’ve got some guys who would have been very, very keen to be involved who will get an opportunity (against Russia) on Thursday.

“We have to stay around our performance-orientated goals. We can’t put anything on the scoreboard without getting the things we need to put in place – that we build the pressure or that we create the opportunities from.

“I felt the first 20 minutes last weekend (against Japan) was very good. We got the right field position and turned a few balls over, which was frustrating. But we converted two tries on the back of some really good line breaks and maybe that was to our detriment because we kinda stepped back after that and didn’t play with the same front foot. You can’t afford to do that against a quality opposition.”

Asked about the inclusion of Murphy as number 8 and the impending return of Robbie Henshaw from a hamstring injury, he added: “Jordi trained unbelievably well today. He is straight off the flight, he got in late Sunday so he’s at least had a couple of nights. He was feeling good yesterday.

“We’ll give him the weekend then after that, so we are just asking for him to do the best he can for us. The one thing with Jordi is that you seldom get anything other than that. He’s a really good performer for us and we’d have a lot of confidence about him being able to slot straight in.

“We felt that was a risk we don’t need to take (playing Henshaw) because Garry is feeling good. We can put Robbie in maybe next week (against Samoa) and, at the same time, we’ve got Bundee back. He’s got a fair bit of bounce about him.

“With Chris Farrell suffering a concussion and it being a five-day turnaround, our hands are tied there. We want to make sure we look after Chris as well and that’s part of the formula.

“We thought about potentially moving Keith Earls in there, but then we’d have had to keep Jacob Stockdale ticking over, and so it was really based around who was still feeling really good.”